Home > Survival Situations > How To Make A Solar Compass

How To Make A Solar Compass 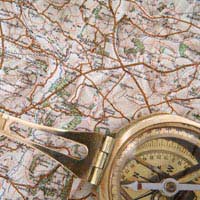 A solar compass is a type of basic navigational instrument you can use outdoors which operates in a similar fashion to a sundial in that it uses the position of the sun to establish your bearings. Although primitive compared to modern navigational technology, it can be a useful support mechanism to have with you in your survival equipment. All it basically consists of is a certain kind of compass rose which you can find a drawing of on the internet and which you can simply print out onto a piece of paper. You’ll also need a needle or stick and an accurate watch.

What Is A Compass Rose?

A compass rose is simply the term which describes the circular figure which displays the orientation of the cardinal directions of North, South, East and West. A compass rose for a solar compass differs in that within it, it features a ring of dots which depicts the hours of the day at which the sun is high enough in the sky to be able to cast a shadow – from 4am until 8pm. To avoid confusion, it uses the 24 hour method of markings. For example, 8pm would be depicted as the number 20. In the middle of the compass rose, there is a vertical line on either side of which are marked the first day of each of the months of the year.

How Do You Use The Solar Compass?

Firstly, you need to take your print out of the solar compass rose and place it horizontally on the ground. It’s extremely important that it is placed horizontally otherwise you’ll get an inaccurate reading. Then, you need to take your needle or stick and place it vertically on the drawing on the exact number which correlates to the time of day. So, if it’s 2 o’clock in the afternoon, you’d place it on the number 14. If it was 2.30pm however, you’d place it vertically directly half way between the numbers 14 and 15, for example.

Next, you have to rotate the compass rose until the needle or stick’s shadow crosses the vertical line in the middle at a point which corresponds with the current date. For example, if it was June 15, you’d be looking at a point where it crosses the vertical line somewhere halfway between June 1 and July 1 which will be marked on the compass rose. Once you’ve identified the point where the shadow crosses the line, you are then oriented north and south. From that point, you can then establish east and west too to gain your bearings and to guide you.

Although this method of navigating is quite primitive, the fact that as long as you can tell the time accurately, then as long as you are carrying a needle or can find a thin stick, enough to cast a shadow – then, as it can be simply printed off onto a piece of paper and carried in your pocket, so it might come in very useful in a survival situation outdoors.

In fact, some explorers have found it extremely useful to their conventional navigational equipment when exploring the polar regions in particular given that conventional compass needles will always point to magnetic north or magnetic south so, in spite of its limitations, it can sometimes be a more reliable guide than a traditional magnetic compass.