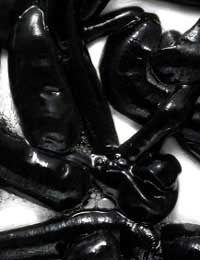 You can recognise leeches because of their ‘worm-like’ appearance. Because they are blood sucking creatures, they attach themselves to your skin and will attempt to burrow into the tissue beneath to feed off your blood. Although unpleasant, a leech attaching itself to an arm or leg is not going to do much more damage than cause a puncture wound if it’s removed fairly quickly. However, if they invade your nose or mouth, it can be more serious.

Where Are Leeches Found?

You’ll certainly come across leeches in the tropics and in other temperate climates. They are commonly encountered by people who swim in infested waters but you can also find them on land too. Still water and bogs are their ideal habitat. Sometimes you’ll find them when cleaning out items which you have caught for food. On land, it’s important that you keep your trousers tucked inside your socks and boots as leeches have an ingenious level of perception attracted by both body heat and vibration. Branches submerged in water or overhanging on land are other places where you need to be careful.

The biggest dangers from leeches are if they enter your body via your nose or mouth - the most common way they can do this is if you’ve drunk infected water. Always carry out water purification treatment before drinking or using water from questionable sources.

Removing a Leech From Your Skin

Some people make the mistake of trying to remove a leech by grabbing the large sucker at the larger end of the leech. Alternatively, they’ll try to pull up on its middle section or make other attempts to remove it by squeezing its body or putting salt on it whilst it’s still on the skin. All of these methods are incorrect and are only likely to result in the leech regurgitating its food back into the open wound it has created which is only going to further spread its bacteria.

The way to remove a leech is to look for the oral sucker which is the small end of the leech. Then, position your fingernail on your skin directly next to the oral sucker. Slide your finger towards the oral sucker and push it away sideways which will cause it to detach. While doing this, push or pick at the larger end to cause the leech to lose its suction. Even though the leech may even have re-attached itself to the finger with which you removed it, you should now be easily able to flick it off. At this point, you can then either apply insect repellent or salt to the leech to prohibit it re-attaching itself to you or anyone else.

Although blood will be visible at the site of the wound, leeches do not generally transmit blood parasites to humans. Although the wound is likely to continue to bleed after the leech’s removal, it is not a significant amount. Simply clean the affected area and apply a small bandage. Try not to scratch the wound but take an antihistamine if the itching becomes intense.

Leeches In The Nose And Throat

Some leeches have a preference for trying to invade your airway via your nose or mouth. There is a dangerous condition called ‘hirudiniasis’ which is where one or more leeches enter via an airway and this can cause a blockage and asphyxiation can result. If you become aware that a leech has invaded an airway but you’re still able to breathe, you should seek medical attention immediately. In the more serious instance of it causing you breathing difficulties and the leech is visible, grasp its hind sucker and yank it off. Alternatively, gargling with diluted alcohol – the likes of vodka, gin and whisky have the required alcohol content - and then spit out the leech.

Be Aware And Continually Check For Leeches

Remember that when they are not feeding on blood, leeches can only survive by clinging onto a solid surface so if you’re swimming in open water, it’s safer to keep away from boat docks and branches. If you’re travelling with others in leech infested territory, get into the habit of checking each other, yourself and your clothing regularly for signs of leeches.

It might also be of interest to know that although leeches can be unpleasant and sometimes dangerous in a survival situation, they have historically been used beneficially in medicine since ancient times.

Today, they are occasionally used in some microsurgery and reconstructive surgical procedures where venous congestion can sometimes occur which can cause the blood to clot and the tissues to die. In this instance, leeches can be applied to the affected site in a procedure known as ‘hirudotherapy’. This works by leeches sucking the excess blood which helps to reduce the swelling in the tissues and thus allows fresh oxygenated blood to reach the area affected until normal circulation is restored.

Surviving in the Desert
Share Your Story, Join the Discussion or Seek Advice..
[Add a Comment]
Can it penetrate completely into the body through navel ? If, then how one can know that it has entered into body ? And what harm it can leads to ? What step should be taken in this situation. ?
Hashmi - 22-Oct-17 @ 9:49 PM
The easiest way to remove a leech from skin is just by sprinkling salt over the leech which would immediately detaches itself and dies.
zan - 13-Mar-17 @ 9:07 AM
I'm 14 and was swimming st Brady's run in beaver county and I got bit by a leech.. I would of never knew unles my boyfriend hasn't mentioned anything to me.. Anyways what do I do
Paigey - 2-Aug-16 @ 9:53 PM
What are benefits from leeches.
Joe - 2-Oct-15 @ 7:19 PM
Interesting that leeches are still in use medically today, even if no one’s trying to bleed anyone with them as they used to do. It does make it seem as if those physicians, in a twisted way, might really have been on to something, after all. Even more folk medicine, old-style, that’s still proving useful.
Jane - 27-Sep-12 @ 11:31 AM
Title:
(never shown)
Firstname:
(never shown)
Surname:
(never shown)
Email:
(never shown)
Nickname:
(shown)
Comment:
Validate: