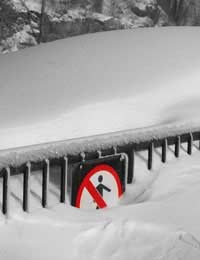 Survival in an outdoor environment will be precarious and a test of your resilience and character at the best of times. However the problems you might face can be compounded if you have additional adverse weather and natural disasters to face as well. Here are some useful tips to help you to cope.

If you are faced with a blizzard, you must return to your shelter immediately. If you haven’t yet got a shelter, you need to find one or build one straight away which is out of the wind. You then need to build a fire for warmth and protection and to attract attention and wear the warmest clothes you have with you. You shouldn’t eat snow but melt it first as it will only reduce your body temperature more quickly leaving you more at risk of hypothermia. You should never attempt to walk out of a blizzard but sit tight in your shelter and ride it out. This is because you can become very disoriented in blowing and drifting snow.

If a forest fire has got out of control, you need to move away from the direction in which it is travelling. Take a moment to see which direction the prevailing wind is blowing, as fires will travel faster in the direction of the wind, so you need to be heading in the opposite direction to the wind. They also travel faster uphill than downhill. Try to locate a natural fire break such as a river which you can cross over to the other side.

In the event that you find yourself with no option other than to face the fire head on, cover your face with a wet towel or item of clothing and run as fast as possible through the flames. If you have access to a swim area, that’s even better. Then, you should make sure that your clothes are soaking wet too before you attempt to run through. If your clothes do catch fire, you need to get down on the ground, curl up in a ball and keep rolling to try to extinguish the flames. Alternatively, if another member of your party’s clothes catch fire, tell them to lie down and curl up then try to smother them with a blanket or some item of clothing to prevent air fanning the flames and roll them along the ground over and over until the fire is out.

The main dangers from strong winds and storms are being swept off your feet and being hit by falling debris so you should stay away from cliff faces and mountain tops and try to find shelter. When finding a suitable place to shelter, be sure that it, too, is not at risk of falling debris or flooding then wait in the shelter until you’re sure the storm has passed.

Finding shelter away from the direction in which the funnel of the tornado is heading and preferably some kind of underground shelter is crucial to your survival. However, if there is simply no time your only option is to cling on to the base of a tree and hope.

The golden rule when faced with lightning is to try to remain lower than any other object around you. If you’ve something that can act as an insulator, perhaps a rubber based camping mat, a coiled up rope etc., sit on it with your feet off the ground. In an open field or plain and with nothing to act as an insulator, your best hope is to lie down flat with your arms spread out. If you can take refuge in a cave, do so, but only if it’s deep or like a long tunnel as many people have taken refuge in a narrow cave and have still been struck by lightning by standing directly underneath the overhang of the cave.

There are many signs and useful tips for spotting areas where there is a greater potential of an avalanche occurring but if you happen to be caught in one, there are some actions you can still take to increase your chance of survival. Firstly, if you are wearing skis, snow boots and carrying poles – discard them. And, if you have enough time and there are some rocks or trees to shelter behind, do so and crouch low and away from the direction of the avalanche covering your nose and mouth and bracing yourself against any impact by holding on to a tree if possible. When the avalanche has passed, pull your hands and arms free to clear any snow from your face and kick and thrust your way to the surface just prior to the snow reaching a complete stop. Try to keep above the snow and move towards the side of the avalanche. Once you’ve dug yourself out, then is the time to call out for rescue.

Natural disasters are often hard to predict but, although this article gives you a few pointers on increasing your chances of staying alive once the disaster has already occurred, you should also learn about ways of being able to read the signs and to predict the possibilities of a natural disaster occurring first. Knowing these facts can buy you time and can often enable you to get away from a disaster’s effects before it’s even taken place.